Niantic gave 1,000 nominated businesses complimentary promotion in Pokémon GO for one year. Now, we are sharing their stories. This week, we take a look at how an alternative “hair chop” deepens its connection with the local community using its Niantic Sponsored Location to help drive awareness.

It’s that inclusivity that Blitzkrieg Chop provides its clients that makes their experience so positive. Prices are set so that you pay the same regardless of gender. Shop owner Danielle Jeffrey points out that some women have short hair and men, especially in punk, heavy metal, and self-confessed nerdy subcultures, often have long hair. But she believes the shop’s inclusivity is also reflected in Worthing’s Pokémon GO community.

The salon first opened its doors just months before the coronavirus pandemic erupted in England. As a result, the shop had to close for several months, two different times, and is hoping to reopen soon with new adjustments incorporating staggering appointments, face masks, plastic visors, and sanitation following each customer visit.

Jeffrey comments, “We had a great response when we opened, and turned a profit the first month. We’ve spent a lot of time wondering what could’ve happened if we had opened in a year without a pandemic.” 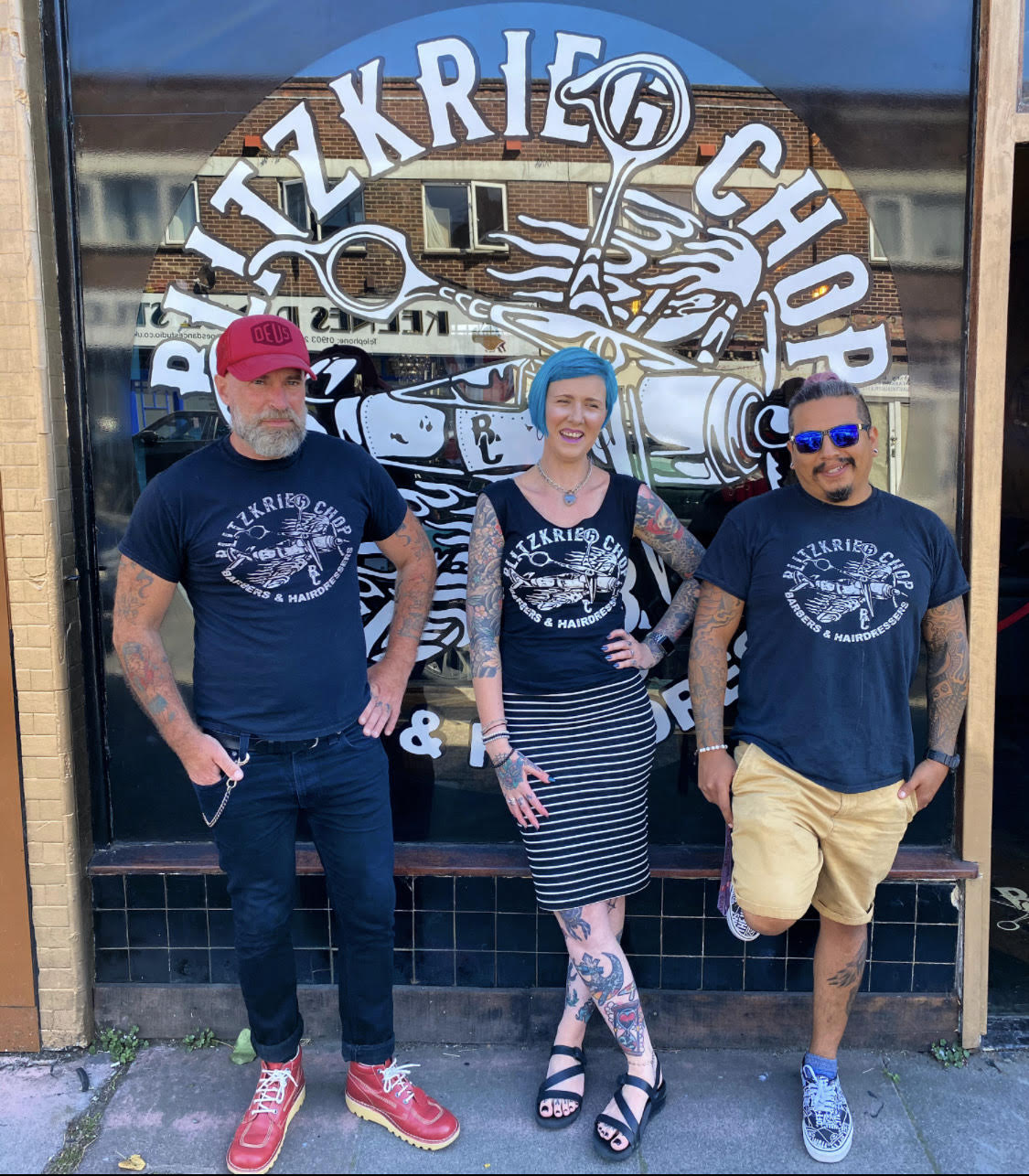 The team at Blitzkrieg Chop: Ian, Danielle, and Jhon

Jeffrey has been a Pokémon GO player since day one – and part of the local punk scene for years. She is known for creating vivid hair colors and diverse alternative hairstyles. She also organizes Pokémon GO meetups and trading events and started the first Pokémon GO Facebook page dedicated to the local Worthing community.

“The biggest thing that has kept me going through all of this is the Pokémon GO community,” said Jeffrey. “Before the pandemic people walked along the water’s edge playing Pokémon GO with groups of 50-60 people. I have something in common with every one of them – that kind of connection forms a bond.”

“We lost everything so quickly, and then to get the nomination to be a Niantic Sponsored Gym Location – it was really cool that our clients thought that we were worthy of it,” said Jeffrey.

In a small town like Worthing, a new Gym is a big deal. So, when Jeffrey promoted her Gym on social media and the local Pokémon GO Facebook page with over 800 active members, people were like “woah, amazing!”

“It's definitely piqued a lot of interest,” says Jeffrey.

Worthing has a limited number of PokéStops – mostly marking Edwardian post boxes – so an opportunity to earn more coins and battle in more raids is incredibly popular among the players. And, since Blitzkrieg Chop is just outside of town, Jeffrey is thrilled to see her business logo and physical location visible for all of Worthing’s Pokémon GO community to see.

“It’s just really cool actually,” Jeffrey says. “When we can open again, so many more people will know about us and we can’t wait.”